The decision last year to award a tender of 24 bus routes in Dublin to Go Ahead generated a predictable amount of misinformation.  Even more confusion and alarm has been generated by the recent Busconnects proposals and consultation process with most of the misinformation generated by elected representatives.

Writing about the Go Ahead decision, Lovin Dublin said that “Dublin Bus will retain ownership of the fleet”, though in fact the buses will be owned by the NTA.

The Irish Times carried a headline “Dublin Bus loses control of 24 bus routes”, though Dublin Bus doesn’t control any bus routes, it operates them under contract to the National Transport Authority (NTA). Coverage in the Irish Times business section included the line “We have simply handed over the operation of 10 per cent of the existing monopoly to somebody else”, ignoring the reality that buses do not have a “monopoly” but must compete for passengers and, in many cases, road space, with a multitude of other transport options.

Social media was awash with statements about how the change will result in buses competing with one another on the street like in many British cities (it won’t) and how this will be A Good Thing (it is generally not, as I discuss below).  There are even more opinions that this is the End of Public Transport As We Know It, that pensioners with free travel passes will be left behind (they won’t) and buses cut if they don’t make money (ignoring completely how a tender contact works).

More recently, many people seemed to conflate Busconnects with the changeover to Go Ahead, with claims that Busconnects is a “Trojan horse for privatisation“.

The latter claim is bunkum on two counts.

Firstly, in Ireland, like most developed countries, urban public transport is subsidised by and regulated by a government agency.  The agency decides where the buses run.  It also decides who runs the buses.  But they are separate decisions.  So the NTA could decide to put the current network completely out to tender.  Or it could decide to allow Dublin Bus to run buses on a Busconnects type-network.  The decision about who runs the buses is largely a political one.

Secondly, it’s not really accurate to describe the way that some routes in Dublin are changing over to Go Ahead as “privitisation”.  As a public service, I hereby provide you with Bus Regulation 101.

There are essentially 4 models for regulation and provision of urban bus services.

Under this model, buses are governed and operated by a single public agency, typically owned by the local authorities. This has been the dominant model from the 1930s.  It is still the way bus services work in most US cities, though it has been largely superceded in the EU.  Railway services in most parts of the world operate this way too.

Other bus operators are constricted because they cannot access funding and/or a license from the authorities.

Such a model offers opportunities to integrate planning and transport, e.g. by providing a good service to a new housing estate even before there are many residents.  It can deliver a good quality service if the service is adequately funded.  Many cities provide excellent services under this model, including the acclaimed network in Zurich.

The disadvantages are a lack of accountability. If the buses are late or dirty, the passenger and ultimately the city suffer, but is anyone going to lose their job?  Those on the right would argue that this creates an unholy inside alliance of politicians, administrators and bus company employees, with the passenger and tax payer firmly outside – part of the phenomenon economists call “rent seeking”.  The cost of running the service may not be completely transparent and can become political football. When this approach was used in Ireland, there were annual lurid newspaper headlines about “CIE losses”, as if this was due to some form of public-sector malaise rather than the cost of running an essential public service.

The regulatory model used in Dublin from 1948 until quite recently was based on this approach, though the buses were operated by a division or subsidiary of an entity (CIÉ) which was owned by central government, rather than the city authorities.  This meant that planning and transport decisions were often conducted in isolation.  Of even greater impact on quality was that bus services were funded grudgingly in comparison international standards.

These days, most city or state authorities within the EU, and some further afield, regulate the buses but do not operate the bus services themselves.  Instead the bus services are operated by separate entity on the basis of a contract.  The bus operators may be within the public sector or privately owned.

For example, trams on both of Dublin’s Luas lines are operated by French-owned Transdev under a 5 year contract. A sister company of Transdev, Connexxion, runs all the buses in and around Amsterdam. A contract may also made with a publicly owned bus company to provide services: this has been the case in Dublin for the last few years where the NTA has a contract with Dublin Bus which specifies the fares.  The NTA also funds new buses.  Northern Ireland uses this approach too – publicly-owned Translink has an exclusive contract with the NI Dept. for Regional Development.

The contract between the city or state authority will specify how much the bus company will receive and what penalties may apply if the service levels are not met. It will generally detail the service to be provided, such as the routes, fares and ticketing systems.   The advantage of this model over the single regulator and operator is the operator is incentivised to provide a better level of service since they may face penalties for breaches, or indeed lose the contract.  There is also greater transparency of the cost of running the service.

The tendered model is like the Contracted Monopoly – but without the monopoly.  The  bus services are awarded by the city or state authority to multiple operators on the basis of tenders.  Helsinki and London use this model.

The tender contract between the city or state authority details the service to be provided, such as the routes, frequency and type of bus, how much the bus company will receive and what penalties may apply if the service levels are not met.  The authority, not the bus company, determines the fares, ticketing system and eligibility for concessions like the Free Travel Pass issued in Ireland.  In most cases, such as London, a “gross cost” contract is used and any fares collected onboard buses are transferred directly to the authority.  The bus company thus doesn’t care if a route they operate carries nothing but a handful of pensioners since they are being paid as per their contract terms.  The advantage of this model over the contracted monopoly is that the competitive tendering process should lead to lower costs.  Furthermore, the prospect of losing a tender contract due to poor performance is a real one whereas with a a contracted monopoly there is probably no other company who could run the routes so little fear of losing the contract. The disadvantage is that there is an administrative  overhead dealing with multiple tender contracts with legal and financial aspects.

Routes may be tendered individually or in groups.  In London, about 12 different companies provide services but the average passenger probably cannot tell one company’s buses from another: they are all painted red and all have the same fare system. In Helsinki, some routes tenders are held by  privately owned companies like Veolia, others by public sector companies.

The NTA’s agreement with Go Ahead to operate 24 Public Service Obligation (PSO) bus routes in the Dublin metropolitan area is based on a tendered model.

In many cities in the developing world, urban bus services are unsubsidised and effectively left to “the market”.  This works quite well if few people have their own cars as there’s plenty of demand.  It is also the way inter-city bus services, which are generally profitable,  work in Ireland and many other places,

Virtually the only place in the developed world to use such a model in an urban environment Britain.  Deregulation of buses in British cities was a product of Margaret Thatcher’s reign: apparently she got the idea from her friend General Pinochet who had deregulated buses in Santiago.  Tellingly it was introduced first in Scotland, often used as a laboratory rat for Thatcher’s policies.  It was never applied in Northern Ireland as there were fears that the paramilitaries would extend their control from the black taxi market into buses.  London was considered too important to leave its transport affairs to the vagaries of the market.

Apart from London and Northern Ireland, most urban bus services in the UK are provided on a commercial basis by a small number of private bus companies such as Stagecoach, Go Ahead and Arriva.  The companies decide the routes, schedule and fares.  Local authorities may subsidise specific services, such as night-time or Sunday services which would not be commercially viable.

The UK, with its 3 different bus regulatory approaches, is a very interesting test bed.

I’ve (crudely) graphed changes in urban bus patronage for most of the UK, divided into 3 regions based on their regulatory approach.  For the “rest of the UK” region I am just using  provincial English cities (sorry Scotland…)  I’ve then added in Dublin for comparison. The figures for London,  and Dublin use 1985 as the baseline.  The figures for Belfast use 1995 as a baseline as I can’t find older figures online.  (I possibly have them in the material for my Masters’ thesis in a box in the attic but I’m not sure enough to bother looking…) 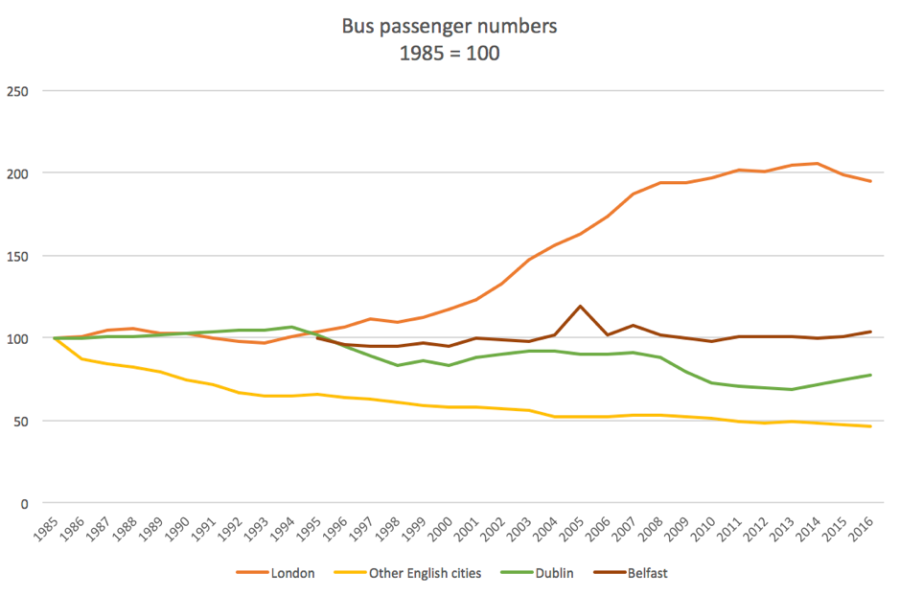 The interesting thing is that buses in London, where the tendered model is used, have doubled their passenger figures whereas in the rest of England, with a deregulated model, bus usage has halved.  Dublin and Belfast, which have retained their publicly-owned provision, are somewhere in between.  The figures for Belfast are a bit better than those for Dublin, partly as a result of its bus network being expanded in 2005 when some outer-suburban routes operated by Ulsterbus were transferred to Metro on its formation.

There are lots of factors at play here: London introduced congestion charging and an explicit policy of improving bus service backed by an much increased budget, neither of which has been applied elsewhere in the UK or Ireland.  The populations of both Dublin a London have increased more than the other regions over the period.

However these factors probably don’t fully explain the large increase in bus patronage in the British capital.  It would seem that the tendered model has the most inherent benefits for the passenger and the deregulated model the least.

Based on this, we should welcome the steps the NTA is taking to move to a tendered model.

Techie boy, transport geek and Dublin Ambassador. Writes user stories and requirement for a living, View all posts by d8boi